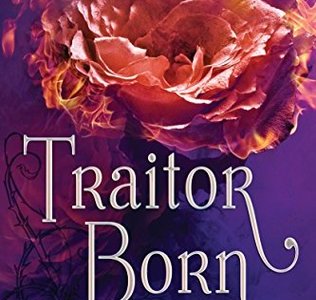 Traitor Born by Amy A. Bartol

This is probably a 2.5/5 too but it was better than the first so I rounded up instead of rounding down.

As I mentioned in one of my updates I feel awkward reviewing books like this because I know I couldn’t do any better, and I also know I’m not the target demographic. Still, it was free on KU and the plot has been compelling enough to keep me engaged.

This review will contain spoilers so stop reading now if that bothers you.

I’ll start with the things I didn’t like that way this review ends with the positives. At times the writing was a little repetitive, and what made the repetition even more noticeable was how it carried over from the first book. For example, the descriptions of muscles on all the men Roselle respects or is romantically involved with. You can tell who the good guys are because they’re hot and muscular. You can tell who the bad guys are because they’re pure evil, usually less attractive, and very immature. Also, most people are blonde. It’s not that big of a deal but it just catches my attention how even some throwaway characters who don’t even need a physical description “brush their blonde hair out of their face.”

I was also not a fan of the love interests (it’s now a long quadrangle). Clifton, Hawthorne, and Reykin are all practically the same character because the most important thing about them is their combat competence and their physical appearance.

The villains are flat (most of the characters are) but they are still just evil for the sake of being evil.

Roselle is too perfect. She is able to kill an entire hoard of enemies at a costume party and come out with only a couple fractured ribs. Then when Clifton gives her this special body armor she is bested by two guards but is miraculously saved because of the armor. There’s really no conflict because it’s clear if Roselle wanted to she could kill everyone at once with ease, and I dont understand the connection she feels with her mom because we never actually saw any relationship (or lack thereof) we were just told Roselle was ignored and her mom hates her. I just mean I feel nothing for her dilemma because I never shared the same hope she had that their family would be reunited.

The only thing that gets in Roselle’s way is her own naivety and it’s kind of annoying because it’s so out of character. She goes from this overpowered demi-god to a bumbling idiot when it’s convenient for the plot or the romantic sub-plot.

It is entertaining though and there were pockets of good writing. Again I feel like I shouldnt be saying that because Bartol produced something better than I could.

As long as the third book is available on KU I will finish the series.

Well, that was messed up, but at least it was only really messed up. Yeah, wow. I finished this about two seconds ago and I’m still processing the whole thing. This wasn’t a thriller in the traditional whodunit sorta way. We know who the killer is early on and see the story from his point of view (though still somehow an omniscient POV too) throughout the novel.

I wouldn’t be surprised if Brady was the character King spent the most time thinking about. He was a truly disturbing character but to everyone else in the world he was just a pleasant and plain man, King distinguished this well by having him tell the reader a violent thought about another character then have Brady engage in a pleasant dialogue with that someone.

Poor Hodges really goes through quite the arc. Starting off by questioning if he should even live anymore and ending up a hero with a purpose (even after the chase is over still actively pursuing a healthier lifestyle). Though Hodges progressed throughout the book and went through a transformation, he still was not a very complicated character. He was a middle-aged white man who felt like he lost his purpose when he was no longer a police officer and with the exception of his unsolved crime cases, most of his backstory is swept up under the “traditional workaholic troubled police officer” trope.

Brady was pretty much Norman Bates with social media. I mean everything about him seemed like Psycho, except the actual cross-dressing. (view spoiler)[ I did like the nod to Taxi Driver at the end though (hide spoiler)].

Most of the side characters were pretty one dimensional too. Everyone on the police force had one discernable trait it seemed. Jerome’s family existed only to give Jerome something to worry about. Jerome was smart and black. I say this bluntly because that’s pretty much all his identity was summed up to be. He was either referred to as a smart black teenager or a derogatory slur depending on who the narrator was following. (view spoiler)[ Janey seemed to have a lot going on in her head but unfortunately, she ended up just being another layer of grief for Hodges (hide spoiler)].

Holly was probably the most interesting of the supporting cast because she almost seemed like she was in a constant state of tearing herself down and putting herself back together (sorta instantaneously too).

All in all I thought this was an incredibly entertaining and at times downright disturbing piece to read. I absolutely plan on finishing the trilogy and expect it to maintain this same level of thrill.

The Return of the King by J.R.R. Tolkien

So I loved this book but it really just dragged on. I mean of the Lord of the Rings series, this was probably my least favorite. The climax felt incredibly short, as did the battle and the ring was destroyed less than three-quarters of the way through. There was an incredibly long journey after the destruction of the ring following the hobbits’ recoveries and their return home.

I also felt like the fight when they returned to the Shire was rushed, and I’m not entirely sure about its purpose. I mean was it just to show that Saruman was in fact dangerous and should’ve never been allowed to walk free? It was such a short exchange full of death threats, then out of nowhere he gets killed by his abused servant. I don’t know. It was just so rushed.

That was the pace of the whole book though, and the series for that matter. One of its allures was all one of its problems. Though I loved the fast pace of it, and am unsure if I could’ve read a slow paced high fantasy, I felt like I missed so much.

Again, seeing the movie before reading the series helped me visualize everything that was going on, in particular when Aragorn, Legalos, and Gimli traveled into the mountain to recruit the army of the dead.

All in all, I think my favorite of the series was the Two Towers, followed by the Fellowship of the Ring, and The Return of the King was my least favorite (though still a four-star read).

Final note: This complaint is not specific to The Return of the King. I wish Tolkien took more time to explain the role and powers of the wizards. I have no clue what Gandalf’s limitations or actual abilities are. I may sound silly for worrying about that, but sometimes he came across as a god and other times he just seemed like an old man. I mean he single-handedly fought the Balrog in Moria, but then the narrator on multiple occasions referred to Aragorn, and Denethor as equals when staring eye to eye with the wizard. If anyone has more information on wizard lore of middle earth please point me in the right direction.