1.5 but rounded up to 2 because I can at least see why other people might like this series. I am clearly not the target demographic.

As usual my reviews contain spoilers so if that bothers you stop reading now.

So I read these books because they’re free on KU but I don’t think I’ll continue with the second series. I don’t know. I might. They’re short so they help boost my reading challenge goal. I’ll think about it.

Every compliment I had for this series went out the window with this one. The first half of the book was Ceony preparing for her Magician exam, which obviously wasn’t a source of stress or conflict because she proved in the first two books that she’s the greatest magician in the world and is perfect.

Like with the rest of the series the main focus was on the sort of forbidden romance between Magician and apprentice. This book showed it was a real problem and other magicians have fallen for their apprentices and it’s a practice that needed to be stopped. So yeah, that’s cool I guess.

Most of the book was Ceony preparing for her exam, except not actually preparing because as I said before she’s perfect. She’s not only perfect and better than any other folder on the planet, despite only being an apprentice, she’s finding time to study every other magic discipline and cook and clean and save the world.

The second book built up two villains that appeared to be a force to be reckoned with. The entire world fears them so of course, they can hold their own in a fight. Then again, they never fought Ceony and her mastery of everything ever created. Ceony easily disposed of her big bad guy in the second book but the more dangerous one escaped. I was optimistic cause I thought, at last, there will be some real tension. There will be a moment where Ceony actually faces a worthy opponent and the book has some real conflict instead of just the will they or won’t they get together conflict.

Nope! Not only did Ceony track down this at large, all-powerful villain easily, she and Emery walked away in relatively okay health. Even though an excisioner is capable of killing their opponent after just touching them, and even though Ceony and Emery were both tied up and at Siraj’s mercy, they somehow never came close to dying. They overpowered him and killed him twice cause he’s just that powerful and weak at the same time.

Then there were like two chapters about Ceony passing her magician exam, graduating, and finally being able to date/probably marry Emery.

As usual my reviews will contain spoilers so if that bothers you stop reading now.

I’m going to start with the things I don’t like so I can end with the things I like and people can walk away from my review feeling optimistic about the book because my compliments will be the last thing they saw.

There were parts of this book I liked and parts of it I was really annoyed by. The romance still annoys me because it feels so forced. Ceony was Emery’s apprentice for such a short amount of time before she fell head over heels for him and I get it, she went through his heart in the first book but I just, I was really annoyed by how over the top in love they were with each other the first time. Like Emery felt closer to her because of it when he could’ve felt violated just as easily. It almost felt like they were in love the moment they met. Anyway, I don’t want to focus solely on the romance because I don’t hate it, it’s just an annoying and unnecessary subplot.

I couldn’t stand the support cast. This was clearly the story of Ceony and Emery, the other characters felt like they were just props to tell their story and didn’t have much of a story of their own. Sure they had some backstory, but the details just felt kind of irrelevant and they felt 2 dimensional at times. Their only recurring traits felt sort of superficial. Like Delilah, I mean come on. Was I supposed to feel emotion when she died? Was she really just introduced in this book to be the cute little girl who wants to help then dies? Cause that didn’t make me feel anything during the book and when I look back on it now it feels kind of contrived and manipulative. I mean she was such an inconsequential character. She helped Ceony by being able to cast spells Ceony couldn’t cast herself and by being scared to show how brave Ceony was.

This brings me to the part of the book I actually couldn’t stand. Everything I’ve said to this point maybe got a shrug from me while I was reading. I still could’ve maybe given it 4 stars or at least 3.5 if those were the only knocks, but Ceony herself has such a martyr complex that just doesn’t make any sense. She doesn’t feel real, she does things that purposefully put herself in danger then lucks out of them and talks like she’s a master magician when she hasn’t even been an apprentice for a year, and Emery just enables her cause he’s in love. Also her entire meaning of existence is Emery, then when her family is in danger she’s like oh yeah I forgot about them now I need to sacrifice myself for them. Like seriously, she felt like she was going out of her way to put people in danger so she could have the right to die for them.

Oh wait I have one more complaint, sorry I just finished reading the book so it’s all still sinking in. It bugged me that the entire magical structure in this world is now fluid. The division is what made it so interesting and unique. Now Ceony is going to be even more powerful despite being an apprentice for less than one year and she had totally contradicting thoughts to this. She was like I’m a folder, it doesn’t matter I’ll always be a folder, then it ends with her looking out the window saying she could be anything she wants. Like come on, so much inconsistency in her character on the last couple pages.

Okay, time for what I liked. Though I thought the villains were defeated a little too quicky in the final fight I thought they were compelling figures. They were at least more powerful than everyone in the book and I were treated with the respect of dangerous threats at large. Since it’s the second book in a series, I would’ve preferred it if they won this round and built up the tension. I mean we know the good guys are gonna win, but you couldn’t even give the bad guys a book to prove how powerful they are? Wow, okay this was supposed to be my complimentary paragraph. I guess I’ll just say I liked them for the amount of time we had them. They were formidable until they weren’t. 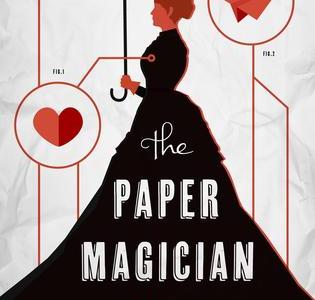 As usual, my reviews contain spoilers so if that bothers you stop reading now.

So, I wasn’t bored reading this book but it did leave me questioning the point of it all. Let me begin this by saying I think it was an interesting concept, I have faith it is going to be an entertaining series, and the writing was fine. That being said, it was a short book and a substantial amount of it took place through sort of flashbacks. What I mean is they weren’t flashback scenes but during the climax of the story Ceony is pursuing an excisioner (and her teacher’s former love interest) to rescue Emery’s heart.

Of course, it’s a bit of a play on meaning since Ceony is also in love/starting to fall in love with her teacher and is willing to go to great lengths to rescue him from his past. I thought the world itself has potential as does the magic system but we barely see any of that. We know Ceony was familiar with the magical world and the non-magical world so it wasn’t like Harry Potter, the two worlds are integrated.

The story is really only two parts. There’s the first portion where Ceony is learning how to be a folder, and the second part when a dark magician bursts through the door, takes Emery’s heart, and Ceony pursues. We learned far more about Emery than we do about Ceony. Though Ceony tries to hold her own with Emery’s troubled past by listing every mistake she made in life, it didn’t paint nearly as whole of a picture as the scene by scene journey through Emery’s life.

As I said, I was entertained enough to continue this series and I see a lot of potential upside, but nothing about this book blew me away. That being said, the series might end up being fantastic since all my complaints are of omission and not faults in the book itself.