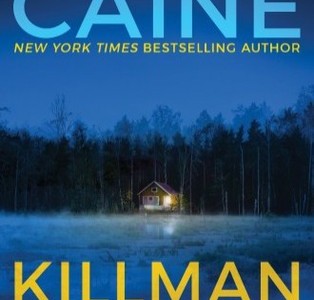 I was back and forth with my review for this book while I was reading it. At times I thought it could even be a 4 and at its worst I thought giving it a 1 might be too generous. Obviously the good outweighed the bad and entertained me enough to give it a solid three.

This review will contain some spoilers so if those bug you I suggest you stop reading here.

I’m not sure if this review will have any rhyme or reason. I doubt it will have any order. I just finished this book not even two minutes ago and already I’m writing this review. What I enjoyed most about this book was the expansion of the criminal network. It was no longer a cat and mouse game with Gina/Gwen and her husband. It was an entire criminal organization standing between her and revenge. Caine handled the webs connecting those in the organization, those on the outskirts of it, those ignorant of it, and those tortured by it with delicate care. She was patient in building it up and created something terrifying. In the end she did give the means to be the boogeyman Gwen thought it to be.

What I didn’t like about this book was–well for one–okay I’m trying to word this right. Diversity in fiction is important, but it’s also important that it’s not just a checklist. Caine wrote a book where all the characters with depth, purpose, and every other synonym for real was white and straight. She then filled all these, what felt like quotas, with not even secondary characters, but the equivalent of film extras. Just little details on skin color or gender that let the reader know she included diversity in the book but that it didn’t matter. These characters were either plot devices (and not real humans) or posters. For example off the top of my head I can think of two black characters in this book. Mike, who we know served in the military, served in the FBI, and is Sam’s friend (nothing else) and a nameless paramedic who I don’t even think has a line but Caine made sure to tell us he’s black. There’s an Indian family that owns a nice bed and breakfast. There’s the transwoman who worked for Absalom, her daughter turns out to be gay, and then there’s Javier (who is by far the deepest, but even he only serves as a gun to protect Gina’s kids in this book).

If that paragraph is too bulky, the tl;dr is diversity is important and this book may have treated it like a checklist.

The other thing I wasn’t too big of a fan of were the multiple points of view. I know people have different opinions on this, but it held the story back, and made it longer than it had to be. Again, as I mentioned earlier this will contain spoilers so take this as a second warning. Gwen got caught by Absalom later on in a hotel room. Gina spent the whole book convinced law enforcement couldn’t help her but all she did was make the situation worse. The only thing she did to help catch Melvin was get caught so Sam and Mike could save the day (but she killed her husband to make it seem like she was proactive protagonist we were led to believe she is).

Okay, I feel like I’m rambling. I’ll try and sum it up all at once right here. Despite a lot of action, the protagonist was still reactionary and ultimately got lucky. What saves this book is the writing in some sections, the engaging twists, and the thoguhtfulness of the criminal enterprise.